If you are looking for a workaround to play Blu-ray movies on a Mac computer, you are in the right place. This post introduces an intuitive and easy-to-use Blu-ray Player for Mac app to do this.

Considering as one of the best Mac Blu-ray Player apps, this program is capable of reading the most recent Blu-ray discs, Blu-ray BDMV folders, and Blu-ray ISO image files. With this app, you are able to play the Blu-ray movies very easily and choose any chapter or title as well as the audio track and subtitles as the author write.

This Mac Bu-ray player app is compatible with Mac OS X Leopard, Snow Leopard, Lion, Mountain Lion, Mavericks and the latest Yosemite (10.10). You can download a demo to see if it is able to work as you want.

The Approach to playing Blu-ray movies on a Mac

You start up the Mac Blu-ray Player app, connect the external BD drive to your Mac with a Blu-ray disc inserted, and then you can click ‘Open Disc’ to enjoy the movie. You can also click ‘Open File’ to play a Blu-ray folder or an ISO file stored on your hard disk drive.

With the Blu-ray movie loaded, you can use the main menu, or click around the Mac Blu-ray Player’s built-in navigation panel to select chapters to view, enable your audio track, choose subtitles stream, and switch up your viewing mode on the fly. 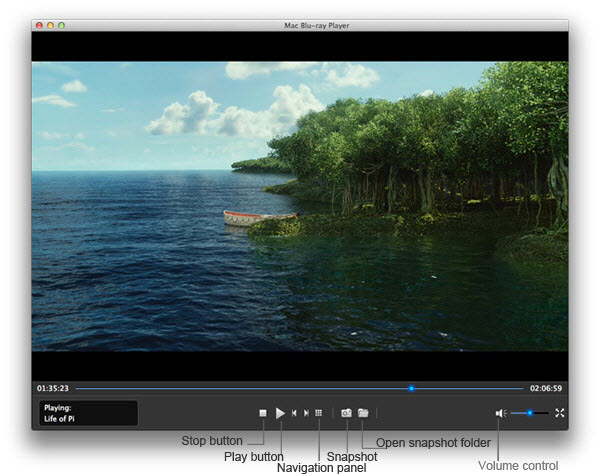 The Mac Blu-ray Player supports Dolby Digital True HD 5.1 and DTS 5.1 surround sound, so you can connect your Mac to a set of surround-sound speakers to experience awesome home theater audio effect.