Summary: We know that theSony HDR-AS100V POV Action Cam is well compatible with Sony Vegas Pro, but if you try to import and edit AS100V footage, especially the AS100V 1080/60p XAVC S MP4 video files in Apple’s iMovie and FCP X, you may have problems one or another. Is there a way to solve this problem? Go to find an answer here in this post. 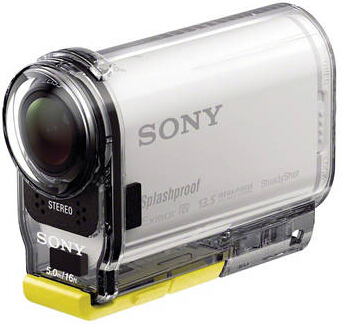 “Hello, I’ve recently purchased the new POV action cam Sony HDR-AS100V and can’t seem to open the AS100V Full HD 1080/60p XAVC S video in either iMovie or FCP X for basic editing. The XAVC S content is stored in a MP4 wrapper. Does anyone know if there is a way to make iMovie or FCP X recognize AS100V XAVC S MP4 natively?”

If your main reason for purchasing a Sony HDR-AS100V POV Action Cam is to record XAVC-S format for a smooth and clear output, you may come to the same situation as mentioned above. The HDR-AS100V lets people record video in the easily shareable MP4 HD format at 1080p at 60fps, but also can shoot in pro-quality 1080p60 movies with bit rates up to 50Mbps in Sony’s XAVC-S format. Additionally, the Sony HDR-AS100V POV Action Cam is also capable of recording at 1080p24 and high-speed 720p video at 120fps and 240fps shooting with sound. If you have problems while editing AS100V video in iMovie or FCP X, we would recommend that you convert AS100V 1080/60p XAVC S to AIC for iMovie and transcode AS100V 1080/60p XAVC S to ProRes for FCP X. This required third party software like HD Video Converter for Mac, which works well as a Sony XAVC S Video Converter.

3. Select output format for iMovie and FCP X
To create editable files for iMovie, from the Format bar, choose ‘Apple InterMediateCodec (AIC) (*.mov) as output format from ‘iMovie and Final Cut Express’ column. Note that the AIC codec is also accepted by Final Cut Express and Final Cut Pro (HD 4.5 through 5), but rarely used in Final Cut Pro as of Version 6 since it now uses the ProRes codecs instead of the Apple Intermediate Codec.

To export the best editing codec for FCP X, from the Format bar, select ‘Apple ProRes 422 (*.mov)’ as output format from ‘Final Cut Pro’ catalogue. The ProRes is able workable in the former version FCP 6 and FCP 7.

6. When the conversion process is done, click on ‘Open Folder’ button to get the generated AIC/ProRes QuickTime files and open them in iMovie/FCP X for further editing.