Win 8.1 will not open MPEG-2 files, how to fix that?
“I am running Win 8.1 and NONE of my players will open MPEG-2 video files.  Windows media player sees these as audio files and Real Player tries to open the files but also only finds and plays the audio track – NOT the video.  The proprietary file player built into my PC by Toshiba also can’t open these simple files. The MPEG-2 files conform to the NTSC standard for MPEG-2 in all ways.  These files open perfectly on my PCs running XP, 7 Ultimate and even Vista in all the same player applications including Windows Media Player so it seems this must be a Windows 8 issue. PLEASE HELP!!!”

If for some reason you can not play MPG/MPEG files on Windows 8/8.1 WMP correctly, you may convert MPG/MPEG to WMV format, Windows Media Player’s favorite format before playing, which WMP will recognize and play well.

Read on to find out a step-by-step guide on how to convert MPG/MPEG video to WMV for viewing in WMP on Windows 8/8.1 with optimum performance.

[Guide] How to convert mpg/mpeg files to WMV for playing on Windows 8/8.1 WMP?

You may try these steps and check if that helps.
Step 1: Run HD Video Converter as a professional MPG to WMV Converter for Win8. Once the main interface comes up, click ‘Add File’ to import your camera media. 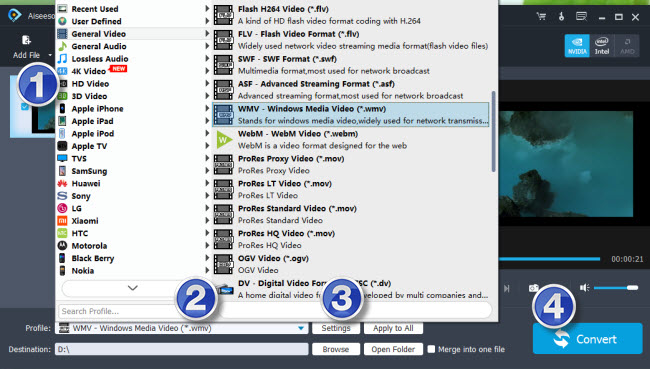 As soon as the conversion is complete, click ‘Open Folder’ button to get the generated WMV files for playing with Windows Media Player.