Skip to content
Home » AVCHD workflow with iMovie/FCE » How can I import Sony RX100 III 60p footage to iMovie?

Summary: The Sony Cyber-shot DSC-RX100 III Digital Camera offers the ability to shoot in the high-quality XAVC S format, AVCHD ver. 2.0 format, as well as the web-friendly MP4 format. If you intend to import Sony RX100 III 60p footage to iMovie for basic editing, you will need to transcode RX100 III 60p AVCHD or XAVC S video to Apple InterMediate Codec before you start. This guide tells you how to do format conversion.

Being the newest member of RX100-series, the Sony Cyber-shot DSC-RX100 III Digital Camera is most notably characterized by its incorporation of faster lens, an electronic viewfinder, and enhanced feature set for recording Full HD movies. 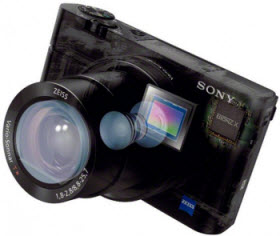 Compared to its predecessors, one of the most marker improvements of the RX100 III is its enhanced video-recording capabilities. The RX100 III offers the ability to shoot in the high-quality XAVC S format with full-pixel readout and 50Mbps recording. Plus, recording can also be done in the AVCHD ver. 2.0 format, as well as the web-friendly MP4 format. Additionally, dual recording is also possible, permitting the simultaneous recording in both XAVC S and MP4 or AVCHD and MP4 in order to gain both a high-quality format and a sharing format of the same footage.

How can I import Sony RX100 III 60p XAVC S/AVCHD files to iMovie for editing?

5. When the conversion process is done, click on ‘Open Folder’ button to get the generated AIC QuickTime files and open them in iMovie to create your own masterpieces.