If you are shooting with a Sony XDCAM camcorder like Sony PMW-100, Sony PMW-200 or Sony PMW-300, you must be familiar with the MXF recording format. The problem is that, due to incompatibilities, MXF is not a viewable format for QuickTime Player. If you would like to play XDCAM MXF files in QT player, you will need to convert them first. This requires third party XDCAM MXF to QuickTime Converter. Read on to find out a step-by-step guide talking about how to transcode Sony XDCAM MXF files to MOV for watching with QuickTime player.

Step 2: Select output format
If you want to play Sony XDCAM MXF footage in QuickTime player, you can click on the dropdown menu of ‘Format’ and select ‘General Video -> MOV – QuickTime (*.mov)’ as target format. If you want to output files with HD quality, you select the relative MOV format as output under ‘HD Video’ catalogue. 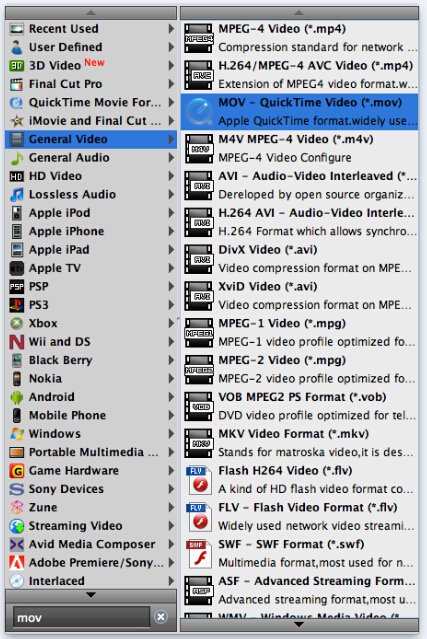 Step 4: Start Sony XDCAM MXF to QuickTime conversion
When ready, click ‘Convert’ button to begin format conversion. As soon as the conversion is complete, you can click ‘Open Folder’ button to get the generated MOV files that are ready for playing with QuickTime player.