Skip to content
Home » Screen Recorder » How to record screen of your computer desktop?

You may need to record computer screen in some situations, for example, capture video chats in Skype, record important presentations, record game process, capture the streaming videos and music, record the Google Earth tour playback from the desktop, save the online training video and more. Here in this article we would like to show you the simplest way to record your computer screen with the best Windows Screen Recorder.

How to record screen on Windows 7/8/10?
Many people may ask such questions like “How to record my screen of Windows computer?” on Yahoo answer, reddit and other forums. With the best Windows Screen Recorder, you are able to record your screen and anything showing on your computer.

Free download and try this Video & Audio Desktop Screen Recording software on your computer, and begin to record your screen at once!

You should know that, this software is a Windows Screen Recorder, that is, you can only record screen on Windows computer. Keep reading to learn more about how to record video on a Windows PC.

How to record screen of your Windows PC?

1. Install Screen Recorder
After downloading this desktop recorder on your computer, you can install and launch it with double clicks.

If you are going to save streaming video from YouTube, the music videos, online movies, Netflix or some other sites else, you need to select the system audio and turn off the microphone. Why? Because the noise around will reduce the quality of your video and affect the video effect. 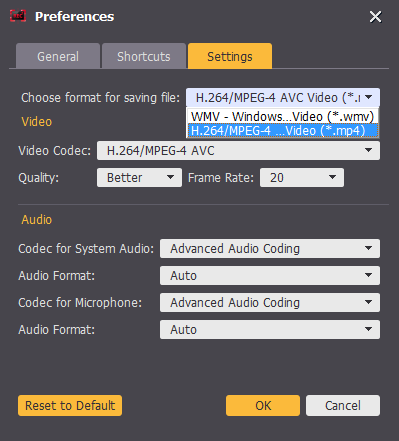 You can also click ‘General’ option to set the location of output files.

5. Record the desktop screen with this professional Video Recorder
After setting the recording area and audio, you need to open the window which you want to record. For example, if you want to record Netflix videos, you should open the certain video link, and select the recording video area, then click REC on the right side of this video screen capture to begin recording.

6. Click the red pause button to stop recording.
Now you have finished the screen recording process with this desktop recorder. You can find the generated WMV/MP4 video in the output folder easily. If you want to turn the recorded MP4 video into other video formats such as AVI, MOV, MPG, etc. you can give HD Video Converter a shot.

Read more
How to change/convert .kmz to MP4?
VRO to MP4 Converter-how to convert VRO to MP4 on PC/Mac?
MPG Windows 8.1-how to play mpg/mpeg in Windows 8.1 WMP?
Canon AVCHD to MP4 converter-encode XA10 MTS to MP4 for playing